Two years ago, Christianity Explored entered into a partnership with Prison Fellowship International (PFI).  PFI developed a new in-prison evangelism and discipleship program with the Christianity Explored prison edition at its core.  They branded this new program as The Prisoners Journey (TPJ).

11 countries and is now running in 161 prisons.  43,000 prisoners have been exposed to the program, and 23,000 have completed the Christianity Explored course, and 14,000 have gone on to further discipleship and Bible study.

The goal is to present the gospel through the Gospel of Mark to one million prisoners by the year 2020.  PFI estimates that at the current response rate and planned expansion to other countries, they are ahead of schedule toward meeting that goal.

Below is the TPJ Logic Model, or projected flow of prisoners through TPJ in a typical international prison. The typical prison has 500 prisoners, although that number is moving upwards to 600 prisoners per prison in many countries. TPJ is introduced by a big event that seeks to reach half the prison population. Of the prisoners coming to the big event, about a third will enroll in and complete The Prisoners Journey course, which is essentially the Christianity Explored prison edition course. The really exciting news is that 60% of those completing the course will go on to further discipleship and Bible study. This is then repeated three times per year. The typical prison has an annual turnover rate of 20%, so there is a constant flow of new prisoners to reach, and also prisoners who complete the course want to invite others to participate. Through TPJ, Christianity Explored is helping bring the gospel to some of the darkest places in the world. 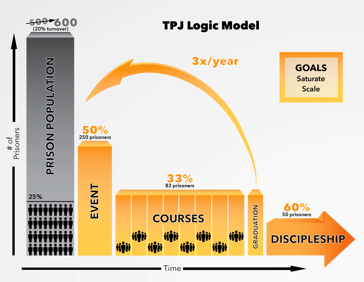